SHOULD WE REALLY BE HATING KANYE WEST?

SHOULD WE REALLY BE HATING KANYE WEST?

Kanye is without a doubt one of the most important figures in hip-hop. In 2001, he produced most of the Jay Z’s classic Blueprint album, which brought the heart and core of hip-hop back to the East Coast. Along with rapper, Cam’Ron, he made wearing pink polos trendy and cool. He went head-to-head with the rap-career killer 50 Cent and came out unscathed. He is the originator of soulful beats (with respects to J. Dilla) and flipping classic samples. Yeezy gave us countless hits. He also blazed the paths for artists like J. Cole, Kendrick Lamar, Drake, among others. But with a hell of a welcoming back to Twitter, Kanye is leaving his fans in awe only to ask: Yeezy, Yeezy, what happened?

With the announcement of his upcoming 7-track June album release, a joint album with Kid Cudi, and production for a Nas album, Kanye has recently been the biggest sensation on social media. Now the country FINALLY cares about a black man’s opinion albeit it is not the black experience collective thought.

*Warning, may be triggering for Old Kanye fans and Conservatives. Look at Kanye bringing us all together.

“I MISS THE OLD KANYE”

Kanye West made a reappearance on Twitter recently and it was all the rave. Many of his fans rejoiced. that Kanye was back and sharing his philosophy about life and success. Kanye fans were really feeling the love, retweet after retweet. However, over the course of a few days, the rapper’s tone began to shift to a more conservative and political perspective.

On his first album, College Dropout, Kanye made songs for the grinders, the hustlers. He made music for every hard worker and spoke for the marginalized. Take a look at his lyrics from the song, “We Don’t Care:

“The second verse is for my dogs workin’ 9 to 5 that still hustle
‘Cause a nigga can’t shine off $6.55
And everybody sellin’ makeup, Jacob’s
And bootlegged tapes just to get they cake up”

Kanye went from uplifting his community to being the puppet for the Make America Great Again team. Is it a marketing ploy for his next album?

Kanye has always been one of the more outspoken celebrities. Remember he exercised his free speech at the VMAs by interrupting Taylor Swift’s winning acceptance speech? He had his supporters, but he also had a list of people that hated him for speaking up. Those that hated him didn’t even listen to his music, nor give his music a chance. However, Kanye is now using this freedom of thought to propel and uplift those same people that once hated him. The hated is now revered.

Look, with the growth of social media, no one can expect anyone to have the same viewpoints; however, you must still respect the other’s point of view. This is how society progresses. This is how dialogue is created.

Day-one fans of Kanye may be disappointed, saddened, and even heartbroken at the New-Yeezy, but you must remember that it is okay to agree to disagree more than ever. It is good for your personal lives and to protect your own energies and vibes.

Whether you like Kanye’s tweets and philosophical/political perspective, he has evolved and changed over the course of his career. He will continue on his path of growth or destruction (however you look at it), but it is his path.

Even though he is described as being in the sunken place, he is providing a source of inspiration. At least Yeezy is uniting us as a culture. That is what he does best. 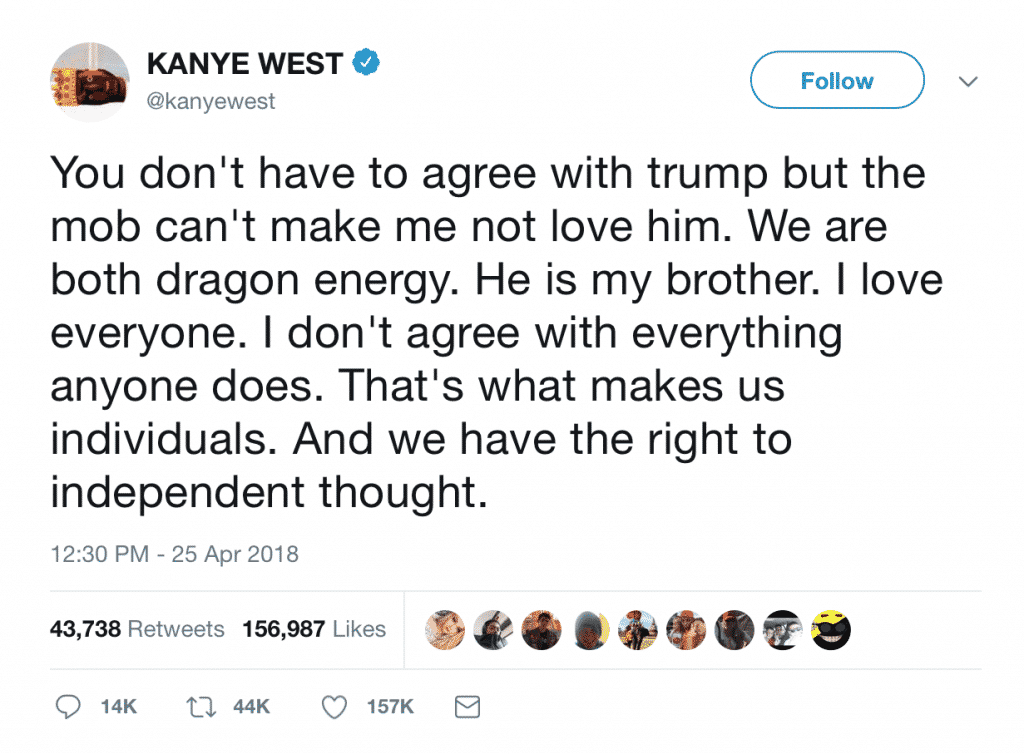 Celebrities are not common folk. They may have started out as the everyday man, but something about fame changes a person. We cannot fault Kanye for his political ideologies. It is time that we separate personal and poitical views from the artist.

You might not like his politics, but you can fall in love with at least one of his songs. 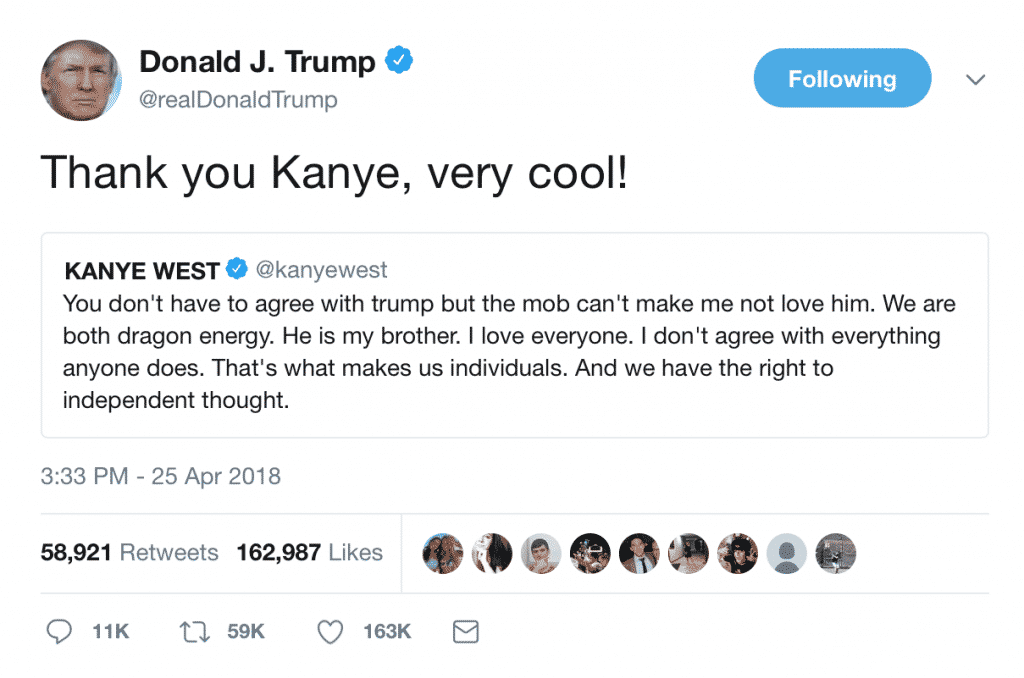 NOTHING OUT OF SOMETHING 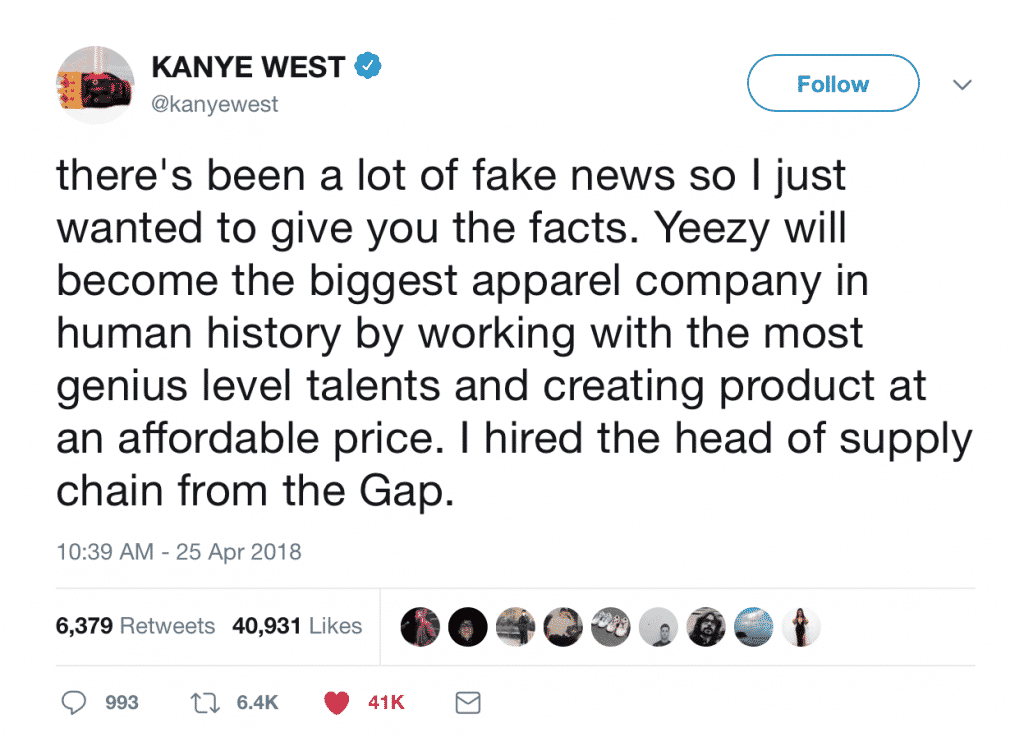 “If my manager insults me again I will be assaulting him

Let’s go back, back to the Gap

Look at my check, wasn’t no scratch”

Kanye hated his first job due to being the token blacky; however, he has finally come full-circle. You can look at his career from working hard and trying to be the best version of himself. Kanye lost his mom, which people say is the biggest turning point in his career as an artist, but it may be the second biggest point in his life aside from marrying Kim Kardashian.

It is a joy to see Kanye smile. He is finally happy. He can finally express his truest and innermost thoughts. We can’t hate him for having a different experience than his listeners and fanbase may have.

I look forward to Kanye’s upcoming music projects. I look forward to the clothes that Kanye is making. While his current twitter account can be seen as a brand and not the person himself, it must be acknowledged that the artist is finally being true to himself.